This blog post aims to showcase my experience working as a student developer at the Accord Project under the Google Summer of Code 2021 program. In this blog, I discuss the problem that I solved, the challenges I faced, and the solutions I built. This was a life-altering experience, the confidence boost I got from this period was very crucial for me. Most importantly the Accord Project community has been very helpful while building this project. Special thanks to Martin Halford, Jerome Simeon, Nikolay Vlasov and Matt Roberts for this amazing experience.

While executing legal contracts, generating trust within the participating organisations becomes extremely crucial. Digital signatures can help in generating this trust. Even in paper-based agreements, contract signing plays a crucial role. Standard ink-based signatures cannot be used here in digital Smart Legal Contracts. So, using cryptography, these digital signatures can be implemented. This would ensure that the contents of the Smart Legal Contract like the model, logic and data cannot be altered, and if altered the signatures would become invalid.

Implementing this project would provide an easy, robust and secure alternative to this whole process. Since the signing and verification process involved in this project is similar to TLS protocols. The whole process can be trusted and is more secure.

This will lead to an increase in the adoption of the Accord Project as signing documents is a very crucial part of the legal industry when it comes to agreements. Digital signatures would always be more secure and fool-proof as compared to ink-based signatures due to the cryptography involved. 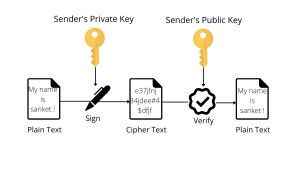 To implement this I found the following libraries helpful: crypto, node-forge. Crypto is a default module that comes with Node.js. It’s also been used in the cicero-core package to generate content based hash for the Template instance. I found crypto’s documentation really easy to understand and well-maintained. Crypto is being used to sign the templates and contracts and verify those signatures.  Node-forge is a native implementation of TLS using javascript. Forge is being used to implement a PKI like infrastructure that would help in importing PKCS#12 keystores and deriving X509 certificates, public keys and private keys from those keystores.

To implement contract signatures, two new methods were added to the Template class in the cicero-core module they are, 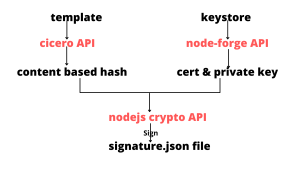 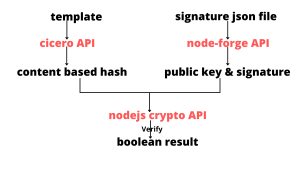 During the design process, two approaches were compared. One was Martin and Nikolay’s approach and the other was Jerome’s approach.

In Martin and Nikolay’s approach, the contract data, the state, the signatures, the template archive’s were being stored in different folders. 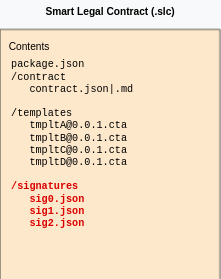 In Jerome’s approach, the file structure was similar to a .cta archive but has an additional folder for signature and while instantiating the contract the data for that contract needs to be passed using a JSON file. 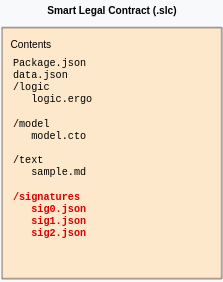 Since Jerome’s POC for Contract Instance was ready we decided to move on with it, also I had extended his POC to try to incorporate the other approach. But since at the time Jerome’s POC seemed more concrete we chose it.

While creating a new Contract Instance, the first job is to parse the template with the data markdown which generates the JSON file of the data present in the markdown file.

Also, we needed to fix the problem to pull out the party name from the data of the contract. For this Jerome suggested a temporary fix of using annotators to pull out party names using the model and the data.

The next step is to instantiate the Contract Instance. This creates a new .slc archive.

Four new methods are created in the ContractInstance class

I got to meet some amazing people whose expertise and experience made my GSoC process smooth and memorable. My mentor Martin was always there to help me whenever I got stuck and he made sure I never got overwhelmed during my time at GSoC. I am sure that the strict coding practices I saw Jerome implement at the Accord Project will help me in my future projects and also the code and the documentation was very neat and on point. It made it easy for me to learn and understand the concepts and understand the code. Also, Nikolay’s insights and contribution to the contract instance design phase and at the weekly meetings were deemed to be very valuable. Special thanks to Matt for administering the GSoC program smoothly at the Accord Project.

I’ll continue to contribute to the Accord Project and will try to add more developers to the community. Also, I wish to continue to work on Contract Instances as it’ll be a very valuable experience for me to bring a concept from just an idea to life and developers using it.